The history of Flaschar’s Mine

The Flaschar’s Mine historic mine works date from the turn of the 19th and 20th centuries, a time when the slate industry boom culminated in the area of the Low Jeseník Mountains. At the end of the 19th century there were fifty-two active facilities devoted to mining and processing slate reported in Silesian industry statistics. There are seven defunct slate mines registered in the location of Nový Svět (New World) not far from Odry, where Flaschar’s Mine is also located.

There is evidence in the archives of slate mining at Flaschar’s Mine dating from the 1880s, when Gustav Mauler, a merchant and the subsequent owner of the quarry, moved to Odry. Other owners of the land on which the former slate mine was located, Johann Fadle and Stefan Foltas, came from the nearby village of Veselí and operated small-scale slate mining for construction purposes. The lack of funds for modernisation of the mine probable forced the owners to lease the mine to Alois Jambora, a businessman from Hranice, in 1898. However, major investor JUDr. Karel Flaschar, entered the slate business in the Nový Svět location when he purchased the mine, expanded and modernised it. He appointed Johann Fadle, the former owner of the mine, his deputy.

JUDr. Karel Flaschar drove a new gallery following the slate deposit, near the existing mine and connected this gallery with the original mine by means of an 18 m ventilation shaft. This gallery is called “Hortenzia Gallery” on a surviving mine map, which is the first name of JUDr. Karel Flaschar’s wife. Wooden buildings used by the mineworkers were built near the mine. We estimate that the mine had 20 employees. The only surviving photograph of slate mining in the Odry Region probably comes from this period.

JUDr. Flaschar and his family moved to Graz after the dissolution of the Austro-Hungarian Empire and slate mining ceased in the Nový Svět location. Johann Fadle, the other important person in the sphere of slate mining in Odry, stated his activities as just agriculture, not slate mining, in the surveys carried out in 1910 and 1921. However, he remained the owner of the land on which the mine was located until 1935, which theoretically allowed him to operate the mine. He was expelled to Germany in 1946 at the age of 79. It is clear from available sources that mining at Flashar’s Mine was terminated in the nineteen twenties. 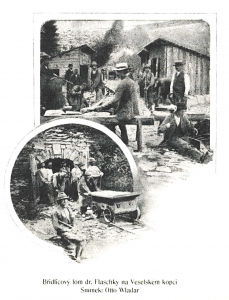 The two-level mine in the Nový Svět location by Odry is now called Flaschar’s Mine. The upper level of the mine, called the “Johann Gallery” on historic maps, is the older section and most of the stopes have now now collapsed.

The lower level of the mine, called the “Hortenzie Gallery” after the wife of Karel Flaschar, has been preserved in essentially its original condition. The mine levels are connected by an 18-meter ventilation shaft.

The tour circuit begins at Hortenzie Gallery and passes though the 200 m long tunnel to the stope. One of the greatest geological points of interest at Flaschar’s Mine - a partially extracted fold - can be found in this chamber. Slate mining activities revealed the face of the fold and the walls of the chamber copy its bend, which allows visitors to view the mineral not only in cross-section, but also in the direction of the fold, which passes through the entire chamber.